With the recent re-emergence of psychedelics within the field of psychiatry, researchers, patients and physicians are still left wondering how efficacious psychedelics are as a potential adjunct treatment, or replacement for current front-line treatments, such as anti-depressants.

Presently, most of the research is primarily focused on determining the efficacy of psilocybin in treating mood disorders, substance and drug abuse disorders, eating disorders and neurodegenerative disorders. However, despite the growing consensus pertaining to the therapeutic benefits of psilocybin, further research is needed in order to establish it as an evidence-based treatment. This has lead researchers to investigate the potential effectiveness of other psychedelics, specifically, Lysergic acid diethylamide or ‘LSD’.

Today, we intend to provide our readers a synopsis of the history and what the current literature within psychiatry has to say about the efficacy of LSD in treating psychiatric symptomology.

Psychedelics are any of the so-called mind-expanding drugs that are able to induce states of altered perception and thoughts, frequently with a heightened awareness of sensory input but with diminished control over what is being experienced.

D-Lysergic Acid Diethylamide or ‘LSD’ is part of the pharmacological group known as “classical hallucinogens” or “psychedelics”, which share its chemical structure with psilocybin and dimethyltryptamine (DMT) as a variant of indolamine (chemical structure similar to the neurotransmitter serotonin).

In the Sandoz Laboratories in Basel, Switzerland, in 1983, Dr. Albert Hofmann synthesized Lysergic Acid Diethylamide. Hofmann was working on as series of compounds derived from ergot alkaloids that had as their basic structure lysergic acid in an effort to develop ergot derivatives with the goal of reducing post-partum hemorrhage. However, since it’s discovery in 1983, LSD has maintained an unstable relationship with psychiatry.

It wasn’t until 1943 that LSD would enter the world of biochemical psychiatry. The major thrust of LSD research has to with its alleged ability to access the “sub-conscious mind”. This notion was probably derived from the dreamlike quality of the reports of LSD experiences and the long-held psychoanalytic view that dreams represent subconscious thoughts trying to express themselves. Therefore, LSD was widely used as an adjunct to psychotherapy – when a psychiatrist felt that a patients had reached a mental ‘roadblock’ and was unable to dredge up repressed memories and motives, LSD was theorized to have ‘mind revealing’ qualities.

Two other potentially therapeutic uses for LSD were investigated as well. For various theoretical reasons, it was believed that LSD might be a good treatment for alcohol dependence, and initial reports of it’s efficacy were quite positive. Additionally, it was later hoped that LSD would allows people with terminal cancer to achieve a greater understanding of their own mortality. This, manus ich patients were allows to explore their feelings while under the influence of this fantasy-producing agent.

However, in the 1960s and 1970s, political parties in the USA blamed anti-war attitudes and the countercultural revolution as a consequence of drug use. Therefore, the 1970 the Controlled Substances Act was passed, which classified LSD and other psychedelics as Schedule 1 drugs thus effectively restricting all medical research into these drugs.

Subsequently, the scientific study of the hallucinogens declined in the 1970’s. A 1974 report by the U.S. National Institute of Mental Health (NIMH) research task force on hallucinogenic research stated the following:

As a result, the NIMH stooped all of it’s in-house LSD research on humans in 1968, and stopped funding university research. The U.S. National Cancer Centre and National Institute on Alcohol Abuse and Alcoholism also followed suit.

Most research since that time has been conducted on animals in an effort to better understand the mechanism of action at a neutral level. Today, roughly 40 years later, a new wave of studies on hallucinogens, primarily psilocybin and now LSD, is creating renewed interests in the clinical potential of psychedelics. It’s too early to tell which way the story will turn, but the next few years are going to be interesting. 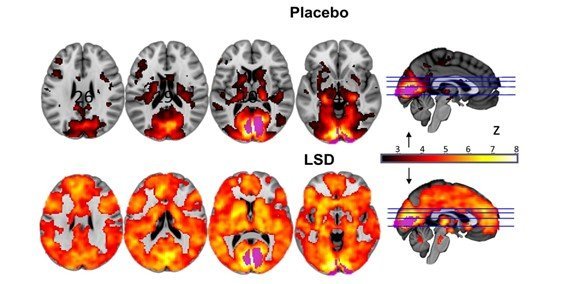 Among the clinical trials reviewed in this article, most of the trials observed positive results, revealing the therapeutic potential of LSD in the remission of psychiatric symptomology. The majority of authors described significant short-term positive.

The evidence to date is strongest for the use of LSD in the treatment of alcoholism. New studies performed under modern standards are necessary in order to strengthen our knowledge, help erase the stigma that still prevails around these substances and open new doors within the field of psychiatry..

**Disclaimer: The medical information on this site is provided as an information resource only, and is not to be used or relied on for any diagnostic or treatment purposes. This information does not create any patient-physician relationship, and should not be used as a substitute for professional diagnosis and treatment. Please consult your health care provider before making any health care decisions or for guidance about a specific medical condition

previous
Psychedelics, A Key to Discovering what Lies Beyond Our Reality