In our last blog, we discussed recent findings pertaining to the potential benefits of Psilocybin as an adjunct form of treatment for several psychiatric illness, however, today we’re going to delve back a bit from clinical research to discuss the fundamentals about psychedelics. Today, we’re going to focus on defining what ‘psychedelics’ (or hallucinogens) are, their origins and most commonly-used forms today – LSD and DMT.

So What Exactly are Psychedelics?

Psychedelics, or serotonergic hallucinogens are a class of drugs that cause profound alterations to our state of consciousness, perception (visual and auditory), mood and cognitive processes, which is attributed to their powerful psychoactive properties.

All psychedelics can be man-made (LSD), or they can be derived from plants (DMT). Typically almost all psychedelics have similar molecular structures to those of endogenous neurotransmitters – acetylcholine, serotonin, or catecholamine.

How Exactly do Psychedelics Work?

Hallucinogens tend to be quite slow in onset, but this varies from drug to drug, and also depends on factors such as whether the drug is taken on an empty stomach.

In other (and more technical terms) serotonergic hallucinogens produce their effects stimulating serotonin 2A receptors, which disrupts coupling between the firing of certain cell types and the rhythmic oscillations of larger populations of neurons. As a result hallucinogens have a disorganising influence on the cognitive processes, thereby allowing the brain to operate in a “freer and less constrained manner”.

In 1932, Albert Hoffman, a researcher with the Swiss chemical company Sandoz, first developed lysergic acid diethylamide or LSD. LSD was originally synthesized from ergot alkaloids, which was extracted from the ergot fungus, Claviceps Purpurea.. He was working with a chemical found in ergot, a fungus that grows naturally on rye and other grains. It wasn’t until 1943, that Hofmann discovered the drugs hallucinogenic effects after accidentally ingesting a small amount. He reported perceiving “extraordinary shapes, with intense kaleidoscopic play of colours”. Hofmann is credited a being the ‘father’ of LSD. 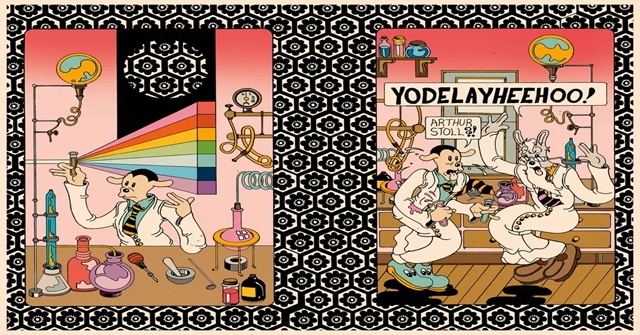 D-Lysergic Acid Diethylamide (LSD) is an odourless, colourless, and is slightly bitter tasting. Today, it is the most potent and notorious of all hallucinogens, and is credited as being the one which brought this family of drugs into the public eye in the 1960’s.

LSD is produced in crystalline form and is then mixed with other inactive ingredients, or diluted as a liquid for production in ingestible forms. LSD comes in various forms, such as:

LSD has a slow onset of about an hour but can last anywhere from 4 to 12 hours before it wears off, however, the effect may linger for up to a day or longer, depending on the dosage and potency. The effects commonly experienced while using LSD, are:

DMT — or N, N-dimethyltryptamine in medical talk — is a hallucinogenic tryptamine that produces effects similar to those of psychedelics, like LSD and Psilocybin.

The use of DMT can be traced back hundreds of years and is often associated with religious practices or rituals. DMT is used primarily for its psychoactive, hallucinogenic effects. “Spiritual insight” is one of the most commonly reported positive side effects of the drug.

Despite its popularity, DMT has never been as broadly discussed as it counterpart, although it has a long, if not noble history. DMT is one of the most important naturally occurring hallucinogenic compounds, and it is found in many Amazonian plants (Ayahuasca) and in trace amounts in humans where is derived from an essential amino tryptophan during normal metabolism. It has been demonstrated that DMT is unique among classic hallucinogens in that tolerance does not develop to its psychological effects.

DMT was first synthesized in 1921 by Canadian chemist Richard Manske. Its discovery as the active ingredient in Cohoba, resulted in further examination of its psychoactive properties in 1956. 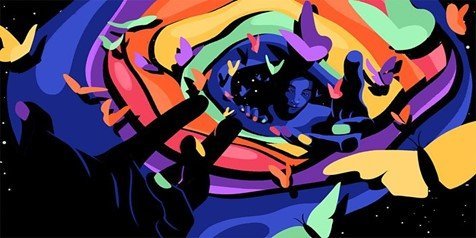 DMT comes as a white, crystalline powder that can be vaporized or smoked. DMT can be consumed using various routes of administration, most commonly:

DMT has a relatively fast-acting psychedelic, in that its onset can ranges between 5 to 60 minutes, depending on the route of administration, dosage, potency and whether you have eaten. Th effects can last up to 30 to 45 minutes (when smoked) and up to 4 to 5 hours when ingested (tea), however, it has been reported that the effects can potentially linger up to 24 hours or more in specific instances. Additionally, DMT is consider to have the lowest side effect profile, relative to other hallucinogens.

The effects commonly experienced while using DMT, are: