A landmark study has provided clinical evidence for the efficacy of psilocybin-assisted psychotherapy to treat depression, even in cases where all other treatments have failed. Oral psilocybin was given to 20 patients with treatment-resistant depression, all of whom had previously tried at least two other treatment methods without success.

Participants had suffered from depression for an average of 18 years, with severity ranging from moderate to severe. Each patient received two doses of psilocybin (10 and 25mg) 7 days apart, accompanied by psychological support before, during, and after each session. All participants also underwent brain scans to investigate the neural underpinnings of psilocybin mechanisms of action on depression. Follow-up examinations were carried out at 5 weeks, and three and six months.

Patients were also shown pictures of faces with various emotional content (fearful, neutral, happy) while in the scanner.  The analysis of brain images focused on the amygdala, a brain region involved in processing fear and stress. Activity in this brain region was stronger in response to being shown fearful faces after the psilocybin session than it was in response to those fearful faces beforehand. This means that psilocybin actually enhances the response to negative emotional stimuli.

This implies that psilocybin-assisted therapy treats depression by enhancing emotional responsiveness. The researchers make some fascinating observations from the interviews that were conducted with the patients in this trial, that help explain these findings. Many of these patients said that they attributed the effectiveness of the treatment to “a greater willingness to accept all emotions”. Many went so far as to say that they felt previous depression treatments had worked to “reinforce emotional avoidance and disconnection”. The psilocybin experience itself, by contrast, had precipitated an emotional “confrontation”: a challenging return to old traumas that had led to “emotional breakthrough and resolution”. The therapeutic process that was by no means easy or pleasant was nevertheless felt to have been pivotal to achieving a therapeutic transformation.

These patient perspectives are supported by previous research demonstrating that the difficulty of a psychedelic therapy experience is in fact predictive of a better long-term result. Another apparently paradoxical finding, but one which echoes the approach of much traditional talking therapy.

All patients showed reductions in their depression scores at 1-week post-treatment and maximal effects were seen at 5 weeks, with results remaining positive at 3 and 6 months. Notably, reductions in depressive symptoms at 5 weeks were predicted by the quality of the acute psychedelic experience. The drug was also well tolerated by all participants, and no patients sought conventional antidepressant treatment within 5 weeks of the psilocybin intervention. While it is important to note that this was a relatively small study with no control group, placebo, or ‘blinding’ (meaning participants were fully aware what they were getting), the results are extremely encouraging and confirm that psilocybin is safe to give to depressed patients, warranting further research into this area. 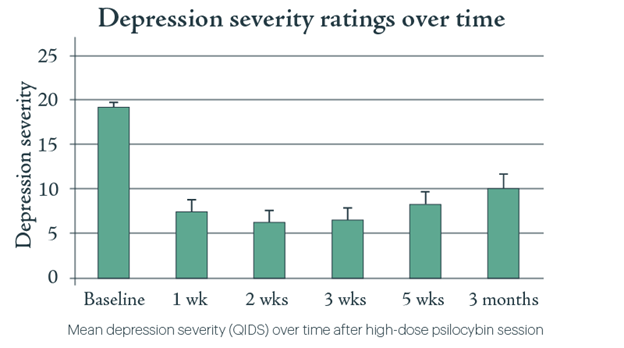 Additionally, in a small study of adults with major depression, Johns Hopkins Medicine researchers report that two doses of the psychedelic substance psilocybin, given with supportive psychotherapy, produced rapid and large reductions in depressive symptoms, with most participants showing improvement and half of study participants achieving remission through the four-week follow-up.

Why is it Important? 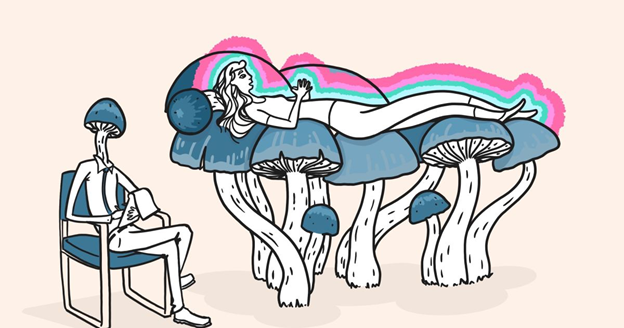 The present study should help to catalyse the re-emergence of a promising research area in psychiatry – psychedelic assisted psychotherapy. Most other depression treatments take weeks or months to work and may have undesirable effects, this could be a game changer if these findings hold up in future ‘gold-standard’ placebo-controlled clinical trials.

Psilocybin, given with supportive psychotherapy, produced rapid and large reductions in depressive symptoms, with most participants showing improvement and half of study participants achieving remission through the four-week follow-up. This substance now has the potential to be an effective form of treatment for the population of patients who suffer from major depression than previously appreciated.

Treatment research with moderate to high doses of psychedelics may uncover entirely new paradigms for understanding and improving mood and mind, which can be attributed to a compound found within psilocybin produces visual and auditory hallucinations and profound changes in consciousness over a few hours after ingestion. The results of this study will help to promote further research into the efficacy of psilocybin as a treatment for major depression.

Check out These Products we offer which relate to this subject: https://www.shroomsdeliverycanada.com/product-category/organic/

With the relatively new re-emergence of psychiatry – psychedelic assisted forms of psychotherapy, or as others like to call it, the “Psychedelic renaissance”, researchers are now conducting studies to determine if psilocybin would be an effective form of treatment for other major mental disorders – anorexia nervosa, substance-use disorders, co-occurring anxiety and alcohol use disorder along with neurodegenerative disorders such as Alzheimer’s.

Disclaimer: Consult a heath care professional prior to considering the use of psilocybin as a form of therapy for psychiatric illnesses.